Risk of the ATO issuing a Garnishee Notice to your employer: A Case Study 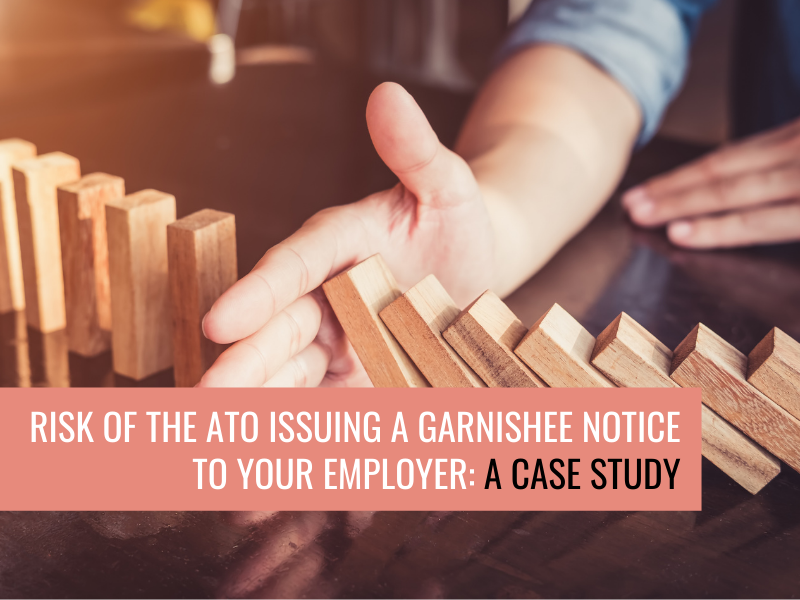 We have written in the past about the ATO’s ability to issue Garnishee Notices including to your employer. This is another example of how this can happen, what the impact was and what should have been done.

We were referred a client who formerly traded a real estate agency business. The business was traded through a company which had gone into liquidation and the client had received Director Penalty Notices for amounts totalling over $140,000, which had expired prior to the company going into liquidation. Now, the first thing our client should have done was liquidate his company when he got the Director Penalty Notices. If he had done this, he wouldn’t have been liable. But he didn’t and he was stuck with the ATO debt of $140,000.

Prior to our client coming to see us he had no assets that could be sold in bankruptcy. However, he had started a job as an employee at a real estate agency. He was earning about $140,000 before tax, but even with this level of income it would take him years to pay off the ATO’s debt plus the other debts he had.

The ATO found out who our client was working for and they issued his employer with a Garnishee Notice requiring his employer to pay a percentage of our client’s gross (before tax) wages. The percentage payable to the ATO was 30% or about $36,000 a year. Because this Garnishee Notice was issued before our client went bankrupt, the ATO can keep enforcing it until they’re discharged from bankruptcy, which is a minimum of three years.

What did our client do?

Our client had no choice but to file for bankruptcy. He could not pay his debts including his ATO debts and bankruptcy released him from these debts (other than the ATO debt through the Garnishee Notice).

To stop the ATO garnisheeing his wages, our client quit his job and found a new one, AFTER he had gone bankrupt. The ATO will not issue a Garnishee Notice after someone is bankrupt so they wouldn’t issue one to his new employer. However, he had to take a pay cut to do this, but he had no other option.

What could our client have done?

Our client should have placed his company in liquidation when he got the director penalty notices. However, given he did not do this, he should have then filed for bankruptcy quickly as there was no prospect of him paying his debts. If he had done this the ATO couldn’t have issued a Garnishee Notice to his employer, as they do not issue these types of notices AFTER bankruptcy.

If our client had contacted us earlier, we could have advised him of these issues and he would have achieved a much better outcome.

If you have a tax debt you should get advice about how to deal with it and the risks involved. We are happy to talk to you for no upfront cost and advise the options available.

So, contact us by phoning 07 3221 0055 or by contacting our Brisbane or Gold Coast office. Our experienced staff will be able to assist you.