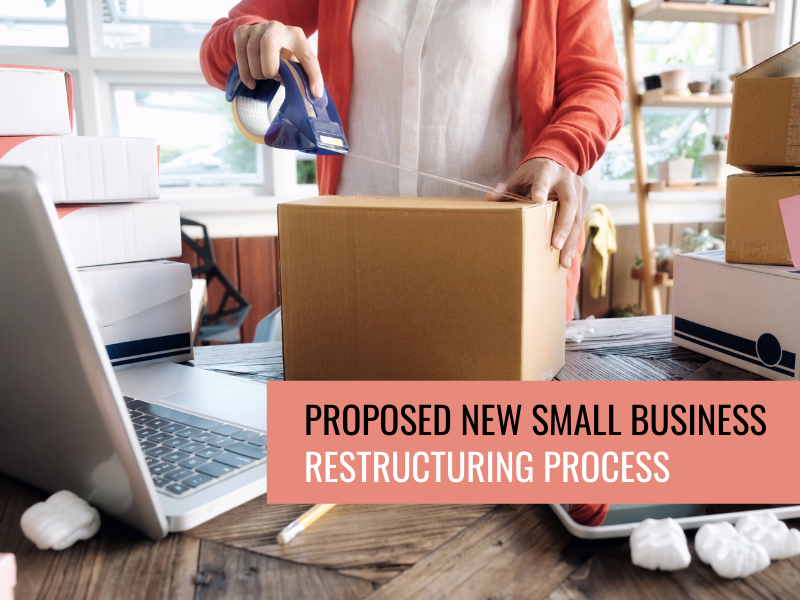 What Businesses Can Use the New Restructuring Process?

Companies with less than $1 million in debt will be able to access the restructuring process. In addition, companies seeking to take advantage of the process must have paid all outstanding employee entitlements including superannuation and have their tax lodgements up to date.

The Government has stated that the new provisions will be operational on 1 January 2021.

How Will the New Process Work?

Once the small business restructuring practitioner is officially appointed:

Importantly for business owners, during the 20 business day restructuring process, they retain control of their company without the oversight of an insolvency practitioner. This will help minimise costs and also business disruption caused by an insolvency process.

At the end of the 20 business day period, the small business restructuring practitioner sends a proposal to creditors to restructure the business, which will include certain funds being available to creditors and creditors’ compromising their debts. Creditors will then have 15 business days to vote on the plan and the plan will be approved if a majority, in value, of unrelated creditors vote for it.

If the restructuring plan is approved, the company continues trading and the small business restructuring practitioner administers the plan and distributes funds to creditors.

If the restructuring plan is not approved, the process ends, and the company’s directors can then decide whether to place the company into voluntary administration or liquidation (or a new simplified liquidation process which is also proposed).

We have been helping clients for years to settle debts rather than enter into a formal insolvency appointment. This includes settling lease debts, bank debts and other debts owed to general creditors. However, sometimes informal debt settlement is not feasible, particularly for companies with ATO debts which generally can’t be voluntarily compromised outside of a reduction in interest and penalties.

We envisage that one of the major benefits of small business restructuring will be that it will provide a simplified and low cost way for companies with unmanageable ATO debts to settle those and other debts without having to resort to voluntary administration and the issues associated with that type of appointment.

Whilst the new provisions will not come into effect until 1 January 2021, there is no reason you cannot start planning a strategy to deal with problem debts now, which may include using the small business restructuring process . If you wish to discuss your circumstances, don’t hesitate to contact Pearce & Heers  Brisbane or Gold Coast office so we can assist you.