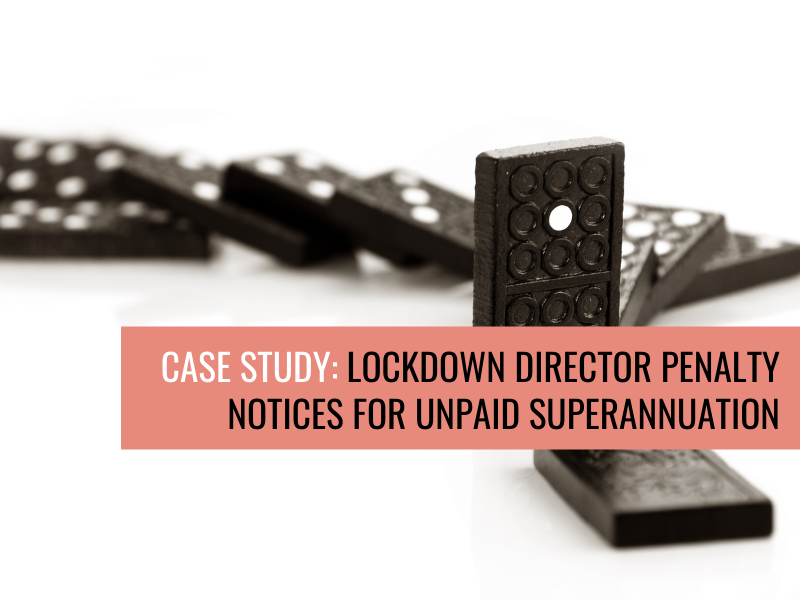 There is also no reason not to lodge SGC Statements as, due to single touch payroll the ATO now knows what debts a company owes in real time.

But despite all this and the risks to directors personally, we still come across companies not paying superannuation and not lodging SGC Statements, all the time.

A recent example of this was a labour hire business we were referred by the company’s accountant. The business had not paid super for nine months and had not lodged SGC Statements. During this time, the business had incurred unpaid superannuation debts of over $100,000 payable to the ATO as Superannuation Guarantee Charge (SGC).

The company could (and should) have lodged SGC Statements with the ATO within one month of the end of the periods which the super became payable. It could then have negotiated a payment arrangement with the ATO for the unpaid SGC, which the ATO would have probably looked favourably on, given the impacts of COVID-19. Ultimately, if the company could not pay the debt, it would then have been open to the directors to look at liquidation. In those circumstances, the directors would have not been liable for the unpaid SGC.

However, because the directors had not lodged SGC Statements, they were automatically liable for the SGC debt and liquidation would not avoid liability. Therefore, they were in a difficult situation as the company was insolvent and needed to be placed in liquidation.

Unfortunately for the directors, they did place the company in liquidation.  However, it was a difficult course of action for them to take, knowing that they would be personally liable for the SGC debt.

If your company is in financial difficulty, there are numerous risks involved, including the risks of lockdown Director Penalty Notices. If you want to find out more about what the risks may be and options which may be available, please contact our Brisbane or Gold Coast offices so we can assist you.