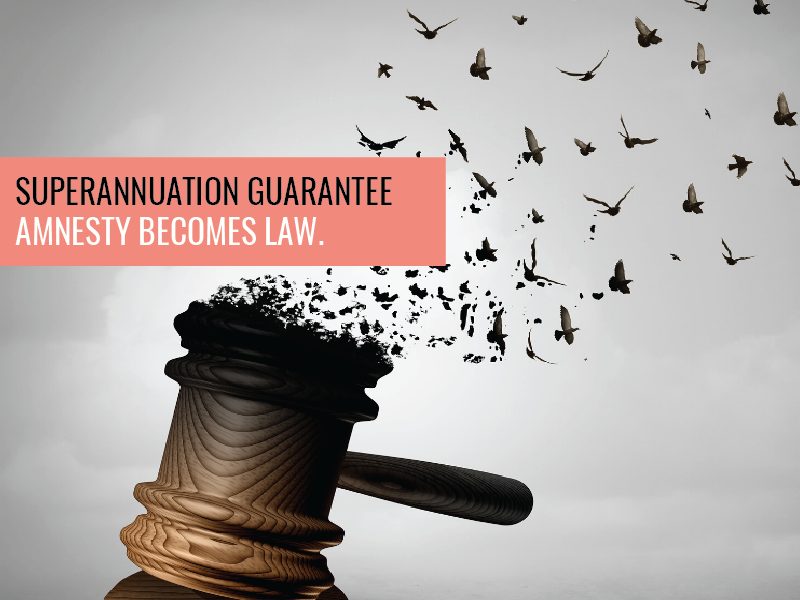 On 6 March 2020, the Federal Government introduced a Superannuation Guarantee Charge (SGC) amnesty. The amnesty allows employers to disclose and pay previously unpaid SGC whilst taking advantage of some benefits.

Advantages of the superannuation guarantee amnesty

The major benefits of the SGC amnesty are that, if unpaid superannuation is reported prior to 7 September 2020:

Employers that come forward will obviously need to pay the outstanding superannuation and they will still need to pay nominal interest.

The Federal Government sought to introduce the SGC amnesty, without legislation in early 2018. However, this was ineffective as it was determined that the amnesty could not be introduced without legislation being passed. This resulted in a number of businesses notifying the ATO of unpaid superannuation, thinking they could rely on the amnesty. The ATO has advised that any businesses who have previously notified it of SGC after 24 May 2018 do not need to notify it again and the ATO’s website states:

“If you previously disclosed unpaid SG to the ATO in anticipation of the SG amnesty, you don’t need to lodge again or apply on the SG amnesty form.

The legislation also comes as a double edge sword as employers who do not take advantage of the policy will be hit with higher penalties. At the end of amnesty, the minimum penalty will be raised to 100% on top of the superannuation guarantee shortfall owed and up to 200% for the most serious cases. Previously the ATO could decide on a penalty range from 1% to 200% depending on the seriousness of the matter. At a 100%, employers will become liable for twice the amount of superannuation payable.

Effect of coronavirus on amnesty

The ATO will not be extending the amnesty as a result of coronavirus and the impact it has had on a businesses’ ability to pay SGC. The ATO’s website states in this regard:

“We understand you may wish to apply for the superannuation guarantee amnesty (the amnesty) and may be concerned that, as a result of COVID-19, your circumstances may change and you will not be able to pay the liability.

If you want to participate in the amnesty, the law requires you to apply by 7 September 2020.

However, we will work with you to establish a payment plan that is flexible to help you to continue making payments. These arrangements include:

As such businesses should still consider “applying” for the amnesty and then seeking to pay as much outstanding SGC as they can by 7 September 2020, so that payments made will be tax deductible.

Company directors need to be aware that they will become personally liable for any superannuation relating to the period after 1 July 2012. This is under the ATO’s Director Penalty Notice provisions. If directors are worried that if they report SGC to the ATO and their company will not be able to pay it, we suggest they contact our office to look at options which may be available.

If your business is unable to pay its tax or superannuation debts, then you should seek professional advice about the options available, including taking advice of the SGC amnesty and business restructuring. So, please don’t hesitate to get in touch with the Pearce and Heers’ Brisbane or Gold Coast office for a free initial, no obligation, consultation.