Unmanageable debt? Understand your options other than bankruptcy… 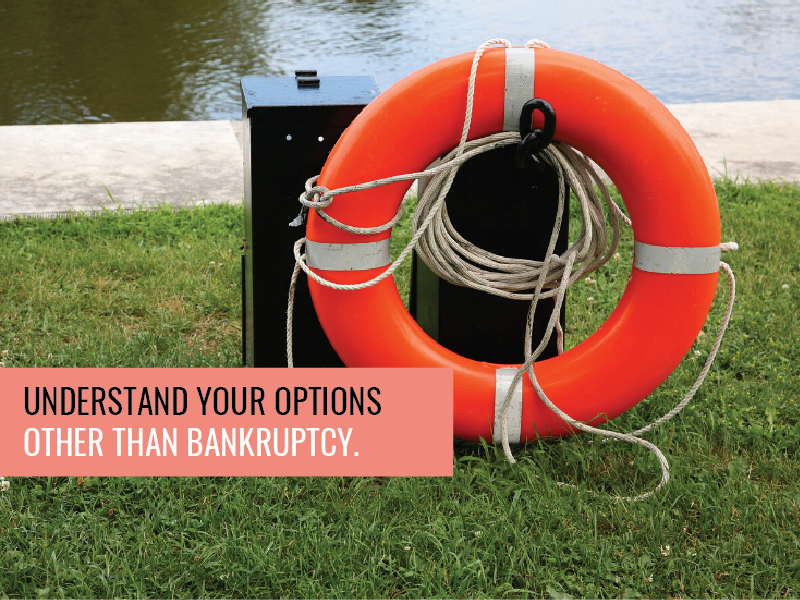 If you cannot pay your debts, then bankruptcy is often an option. But it is not inevitable.

There are other ways to deal with your debts, depending on the situation you are in. This includes negotiating settlements directly with creditors.  But you need to get the right professional advice.

Following are two examples where options other than bankruptcy have worked well for our clients and other parties concerned.

A sole trader unable to pay his debts…

We were recently engaged by an individual (let’s call him Paul) who previously ran an earthmoving business as a sole trader.

The business had ceased trading and Paul could not pay the significant debts he had accumulated to two creditors.

However, by proactively dealing with the situation, Paul was able to settle his debts for significantly reduced amounts and avoid bankruptcy.

Here’s how he achieved it with our assistance…

How we came to an agreement with a judgement creditor

A large, well-known trade creditor had supplied Paul with various stock and was owed $150,000.

The creditor had commenced legal action, obtaining a judgement for the debt it was owed and they had advised Paul via their solicitors that they intended to take action to bankrupt him unless the debt they were owed was paid.

We provided the trade creditor with information regarding Paul’s financial position and the return they would receive as a creditor if he was to go bankrupt (which was next to nothing).

After some negotiations, we were able to settle the $150,000 debt for $25,000 with the settlement amount to be paid within a month.

The trade creditor accepted this amount on commercial grounds as it was ultimately what Paul could afford to pay, taking into account his financial position, including other debts he had to pay.

How we dealt with the shortfall to a financier

One of the big four banks previously repossessed and sold a large piece of machinery that Paul had owned.

Due to this, the bank had suffered a shortfall of just under $40,000. We set out Paul’s financial position to the bank and, after some lengthy negotiations, they agreed to accept $7,500 in full settlement of the shortfall debt they were owed.

The bank allowed Paul to pay the settlement amount over a number of months but ended up receiving significantly more than they would have if Paul had gone bankrupt.

A personal guarantee debt to a landlord after company failure…

This is the second example where options other than bankruptcy worked better for all parties concerned…concerning a company that leases premises.

When such a company fails, there’s nearly always a substantial debt owed to the landlord.

This is because, generally, under the terms of a lease, landlords can claim rent for the remaining period of the lease, once the lease has been breached. While landlords have a duty to mitigate their loss by re-letting a premises as soon as possible, a breach of lease can often result in a significant liability.

It is also very common for the directors of a company to have guaranteed the company’s lease debt, which can result in them being stuck with a large liability.

We were recently engaged by a director of a company who’s company had previously owned a retail franchise in Queensland. The company had a long-term lease in a shopping centre, which the director had guaranteed.

The franchise business became insolvent and had to be shut down and placed in liquidation. But, once the business was closed, there was still a significant debt owed to the landlord (mainly for future rent payable), totalling over $380,000.

By the time we were engaged, the landlord’s solicitors had already issued demands for payment and were about to commence court proceedings against the director.

We were able to eventually show the landlord’s solicitors that, in the event of the director’s bankruptcy, they would not get anything. We then made offers on Brad’s behalf, with a settlement offer of $28,000 being accepted.

This was a great result as it meant the company’s director avoided bankruptcy but it was also a commercially sensible offer for the landlord to accept.

If you have are facing a debt or debts you cannot pay, it’s important to address the problem as soon as possible.

We may be able to help you avoid bankruptcy by reviewing other options open to you.  Simply get in contact with us for a free, no obligation discussion.