One-Year Bankruptcy: What would it mean? 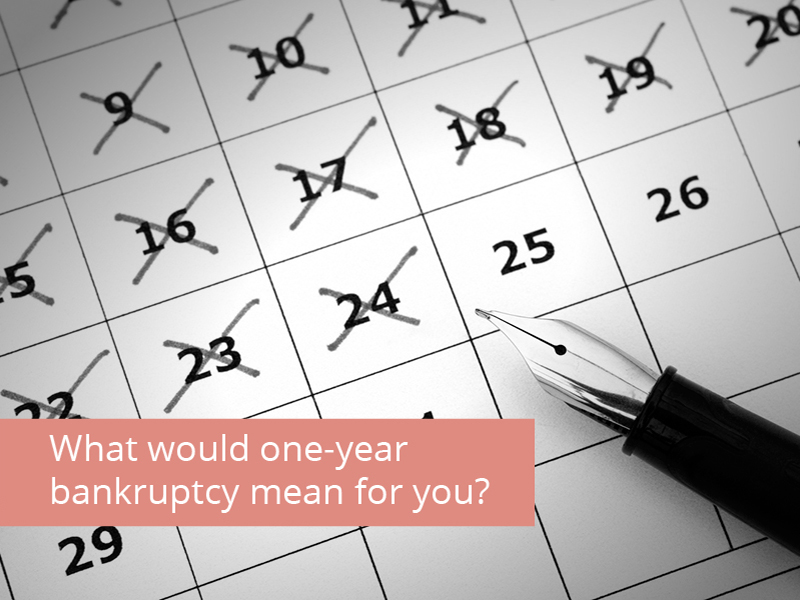 In October 2017 the Federal Parliament introduced the Bankruptcy Amendment Bill. This Bill proposes that the length of bankruptcy be reduced from three years to one year.

If passed, the legislation should come into effect in 2018. But what is the reasoning behind the proposed changes and, more importantly, what would one-year bankruptcy mean for you if you are struggling financially, facing bankruptcy, or already bankrupt?

Why reduce the length of bankruptcy?

The Australian Government believes that a change is necessary to remove the negative stigma of bankruptcy and to encourage risk-taking and entrepreneurship.

As part of the National Innovation & Science Agenda (Innovation Agenda), the introduction of one-year bankruptcy is designed to create a balance between encouragement of entrepreneurship and protection of creditors.

What are the key proposed changes?

The main amendment to the Bankruptcy Act (“the Act”) affects Section 149, which will read if amended:

“the bankrupt is discharged at the end of one year from the date on which the bankrupt filed his or her statement of affairs.”

Other time periods associated with bankruptcy will also be reduced to one year, such as:

When will the legislation come into effect?

The one-year bankruptcy legislation will commence six months after it receives Royal Assent.

This is to provide time for trustees to prepare for any objections to discharge and enable relevant agencies to consider whether a one-year licensing or professional restriction is appropriate for their purposes.

What happens to ongoing bankruptcies?

However, this will not apply to bankruptcies that have been, or are, extended as a result of a trustee filing an objection to discharge. These bankruptcies will still run for up to five to eight years.

What are the advantages of one-year bankruptcy?

The main advantages of the legislation are:

What are the disadvantages of the Bill?

The main disadvantages of the legislation are:

What’s the next step?

If you are considering going bankrupt and would like to discuss the effects of bankruptcy and the options available to you, please don’t hesitate to get in touch with us.