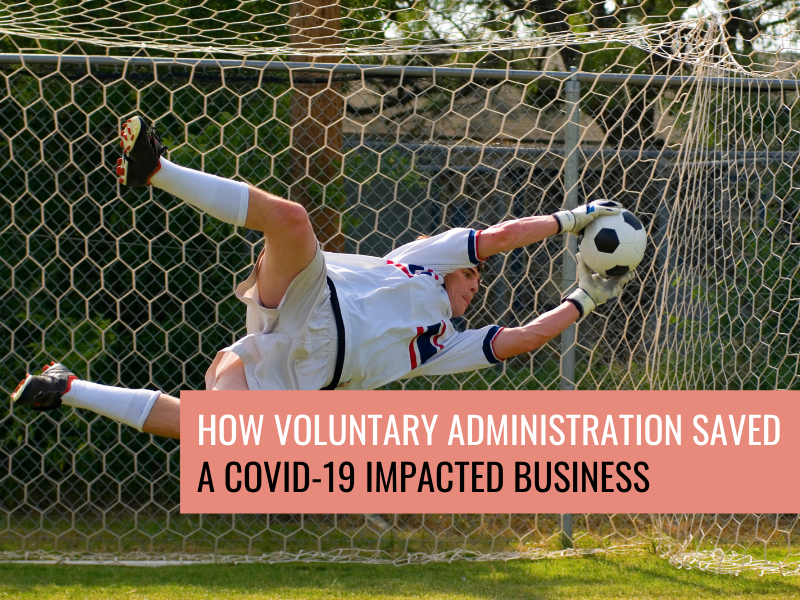 We were recently referred a company which had been severely impacted by Covid-19. The company’s business had been profitable in the past.  However, it had to substantially cease trading for four months due to Covid-19 lockdowns in Sydney, Melbourne and Brisbane, the major markets where it traded. The company had then not returned to the trading levels it had pre the Covid-19 pandemic and it was still making small losses.

To try to reduce costs and turn the business around the directors had terminated the employment of over half the company’s staff, moved out of the company’s premises and sought to reduce other costs. However, because the business had to substantially close without any notice it incurred ongoing costs which it could not minimise quickly.  This left the company with various debts including:

Options available to the company

We met with the company’s directors and their accountant and discussed the options available including:

The company was in voluntary administration for a period of about one month. During this period, we carried out necessary investigations and prepared a report to creditors on the company’s background and other information required under the Corporations Act 2001 (Cth). We also paid necessary expenses and caused the company to lodge activity statements and report PAYG Tax to the ATO.

Proposal for a Deed of Company Arrangement

The directors put forward a proposal for a Deed whereby they would pay certain costs of the voluntary administration (which were unable to be paid as the company had insufficient funds) and a further amount of $100,000 would be distributed to creditors. The amount of $100,000 was for creditors other than customers as the directors agreed to provide future services to affected customers so as to maintain necessary relationships and goodwill.

We were able to explain to creditors that:

A meeting of creditors was held to vote on the directors’ proposal for a Deed and all creditors voted for the proposal including the ATO. This was a great outcome for the company and its directors but was also a better outcome for creditors than liquidation.

Due to the way the directors structured their proposal for a Deed (i.e. in the form of a creditors’ trust) the amount of $100,000 was immediately available to the company once creditors accepted the proposal and the company was immediately released from all forms of insolvency appointment at that time.

The total cost of the appointment including money paid under the Deed was under $200,000. Although this did not include wages and super which the company had pre-paid. The directors funded the Deed amount of $100,000 and some other costs and they also knew they would have to fund some trading costs going forward until the Covid-19 pandemic ended.

However, as a result of the Deed the company was able to compromise nearly $1.5 million in debt, so this was a great outcome.

Voluntary administration can sometimes be the best option for a company in financial difficulty.

If you wish to discuss your company’s circumstances and see if voluntary administration is the best option, please don’t hesitate to contact Pearce & Heers Brisbane or Gold Coast office and our experienced staff will be able to assist you.