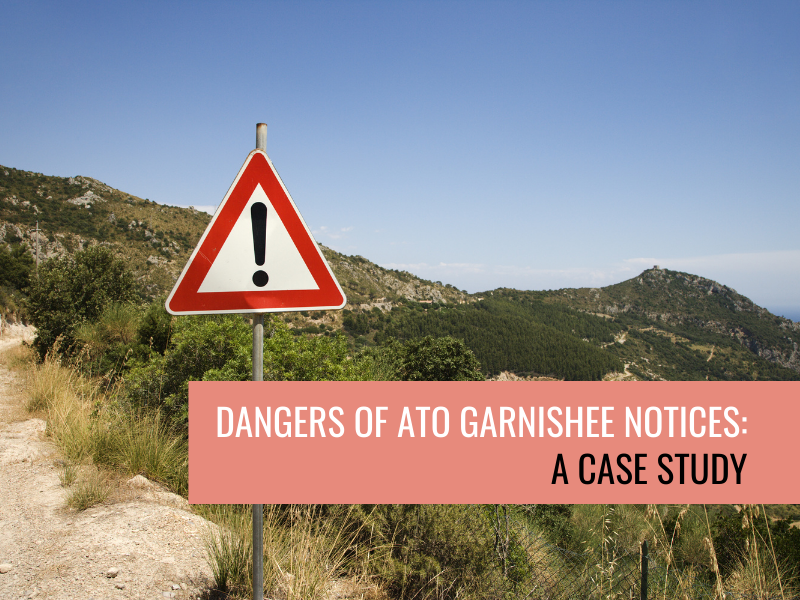 We have previously written about the dangers of ATO garnishee notices and what can happen if you get one. This is an example of what can happen and what our client should have done to avoid the risk.

We were referred a client who was a director of a company which operated a civil design engineering business. The company owed over $1 million to the ATO and the ATO had been threatening recovery action for some time.

On the day we met with the client, the ATO issued a garnishee notice to the company’s bank and took over $120,000 out of their bank account. Due to the effect of garnishee notices once the notice had been issued, there was nothing the client could do. The ATO just ended up with the funds as the bank had a legal obligation to pay them to the ATO.

The fact that the company lost $120,000 meant that it had instant problems paying staff wages which were due fortnightly. It meant that the director had to quickly come up with some funds if he wanted the company to continue trading. Which he did (after considering his options with us).

What should our client have done?

Our client should have obtained advice at an earlier stage. We could have assisted the client with strategies to deal with the company’s debt problems but also minimise the risk of the ATO issuing garnishee notices, or of the ATO being able to recover funds under a future garnishee notice.

What was the outcome?

We were able to assist the client with a business restructure including the liquidation of one company in the group and the closure of one of three offices. But this was made more difficult by the fact the company had $120,000 taken from its bank account by the ATO. And the outcome for the client wasn’t as good as if they had of been able to retain the funds in the company’s bank account.

If you have a tax debt you should get advice about how to deal with it and the risks involved. We are happy to talk to you for no upfront cost and advise the options available.

So, contact us by phoning 07 3221 0055 or by contacting our Brisbane or Gold Coast office. Our experienced staff will be able to assist you.